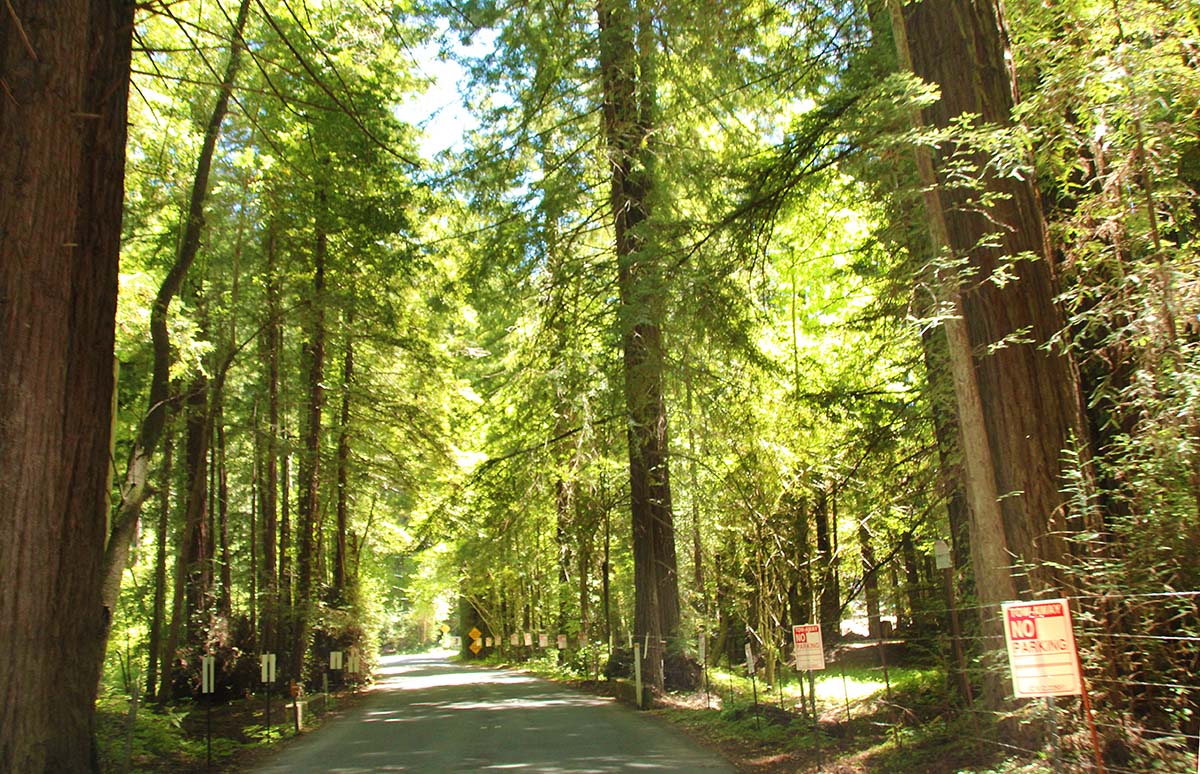 (Please note this place is very much no-trespassing)
(707) 865-2311
Website
Tucked away in a tiny town in Sonoma County sits a secret club known as the Bohemian Grove.  Founded in 1872, this elite men’s-only club boasts some of the most powerful members in the world. For 2 weeks out of the year, past presidents, CEO’s of the country’s largest corporations, oil tycoons, major military contractors, banks (including the Federal Reserve) and national media head out to the redwoods. Here they partake in wild festivities and strange occult rituals.

The reason these festivities are even known is that a couple journalists have successfully snuck in during one of the events and documented what they witnessed. You can watch the entire video of Alex Jones sneaking in here.  The highly controversial Cremation of Care ceremony starts at 53 minutes and by the way, Bohemian Grove confirmed this video is actually real and he did sneak in.

Other than that, this is a tightly sealed, private event. You will find no website for the Bohemian Grove, nor an email or way to apply to be a member. This is an invite-only club.

Some of the more notable members have included Clint Eastwood, Henry Kissinger, Walter Cronkite, Richard Nixon, Ronald Reagan, William Randolph Hearst of the Hearst Castle, Donald Rumsfeld, Dick Cheney, Mark Twain, and Jack London. Almost every president from Eisenhower forward was a member (although usually before they were elected). You can view a more comprehensive list of the members here.

Oscar Wilde does not seem to have been a regular guest here, but he was once quoted as saying “I never saw so many well-dressed, well-fed, business-looking Bohemians in my life.” Bohemian Grove has slightly humbler roots than what it later turned into.  It was originally founded by a collective of male artists, actors and journalists who wrote for the San Francisco Examiner.  Overall, it was a group of creatives that were interested in the arts and culture. They called themselves bohemians in the sense of the “cultured intellectual urban bohemian” making sure to distance themselves from the hippie version.

In the Bohemian Club, the word “bohemian” means something entirely different from how we usually perceive the word to be. In this world it means “United We Stand” and to be unbohemian, is the worst insult of them all.  That means to betray the group and go against the pack.

The men’s headquarters is actually in downtown San Francisco, located on Taylor Street. Here the men have gathered for over a century for drinks, socializing and enjoying theatrical and musical performances.  The red brick, ivy-covered building has the etching of an owl out front with the words “Weaving Spiders Come Not Here” inscribed below. This line is from Shakespeare’s ‘A Midsummer Night’s Dream’ and is the club motto’s which serves as a warning to leave all outside concerns at the door. 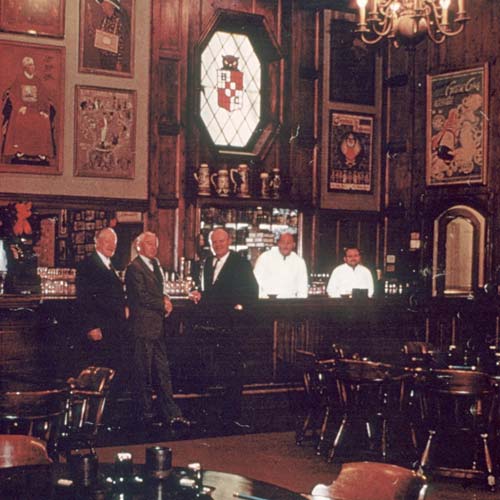 Inside the Bohemian Club in SF

The club’s mascot is the owl, which is known as a wise, predatorial bird who hunts in the blackness of the night. There is a lot of conspiracy surrounding the symbolism of the owl.  Many say the use of this nocturnal creature has ties to the freemasons and other secret societies. Eventually the club expanded to include politicians and affluent businessman.  This is probably when all the suspicion from everyday folk most likely began. Eventually, the original “bohemian” members were in the minority and the wealthy and powerful controlled the club.

As this is a men’s-only club, the entertainment is also all men (although there are rumors of female prostitution occurring on the grounds). For this reason, the theatrical performances have oftentimes included cross-dressing men.  This should be no big deal, until you realize that almost the entirety of this club entails ultra-conservative, high-ranking men. These are the same men that are oftentimes in charge of enforcing the country’s rules, restricting the rights of the same people they are mimicking. Most of the entertainment was provided by members or their guests.  Only a few were professional actors or musicians.

Far more eye-raising than the cross-dressing entertainment is their opening ceremony known as the ‘Cremation of Care’. Since 1929, the ceremony has begun with a boat crossing the lake to a group of hooded men, including a high priest.  Here they wait below a huge 40 ft. owl statue to receive a young child effigy, where they set it ablaze at the foot of the owl.

The entire production has a voice over by Walter Cronkite which includes sound effects of the child screaming as it is burned. There are many elaborate effects to go along with the ceremony which include fireworks and other pyrotechnic displays.

Even before the Cremation of Care was birthed, there were other eye-raising ceremonies being celebrated within the group. In 1893, member Joseph D. Redding performed a play called ‘Druid Jinks’ which represented Christianity defeating paganism.  It consisted of converting druids away from bloody sacrifices and other acts deemed un-Christian.  A little ironic considering that a few decades later the entire theme of their show would be sacrificing humans.

But they had other bizarre events, such as shown below, where what appears to be a real human child is being sacrificed.  Note the men dressed in drag in the front. 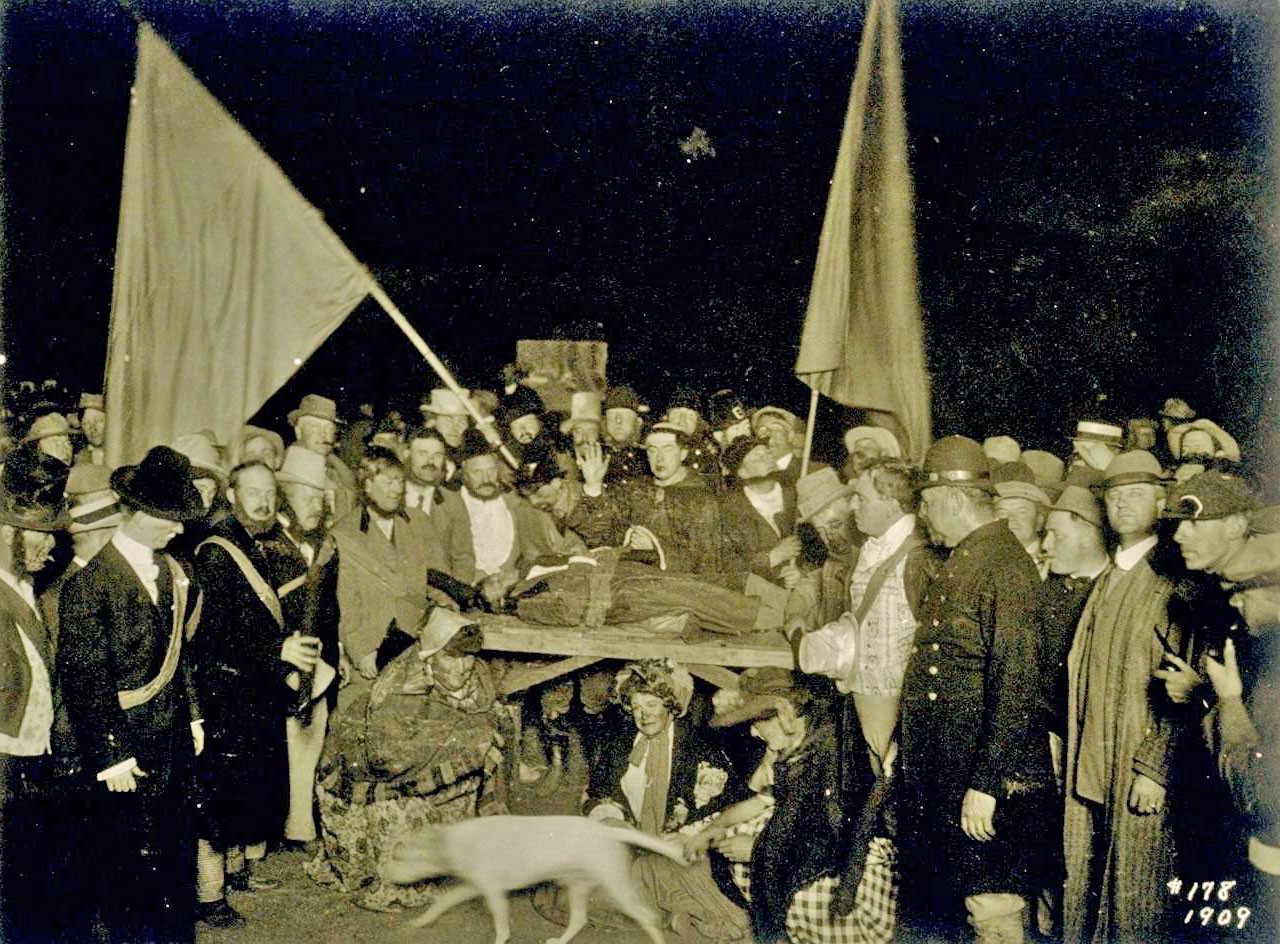 Even more disturbing is this photo of what I am hoping is only a mock lynching (obviously still not ok, but much better than that being a real human). Regardless, only disturbed individuals are going to find enjoyment in this kind of reenactment:

Everything written above is controversial enough, but there is more. It is said that in 1942 “the father of the atomic bomb,” J. Robert Oppenheimer, planned the Manhattan Project at the Bohemian Grove.  This later resulted in the bombing of Hiroshima and Nagasaki 3 years later. I am sure many other life-changing events were plotted here as well.

Women were banned from the club in its entirety until 1978 when a California Supreme Court lawsuit deemed the employment practices to be discriminatory. Females were finally allowed to work here, although even to this day, they are only allowed in very specific areas, mainly valet in the parking lot.

In 2009, the club received state approval for a logging plan that would allow it to harvest as much as 1.7 million board feet of redwood timber for 100 years. The biggest issue is this is an ancient forest with old-growth redwoods.  In the past 150 years since colonization began, over 95% of the old-growth forests have been decimated.

One of the club’s 4th generation members, John C. Hooper (known as Jock) has been a huge advocate for the trees.  So big that he caused a humungous stir within the group and eventually dropped out of it so he could more appropriately advocate for the trees.  It should be little to no surprise that some of the largest capitalists in the country are even capitalizing off their own sacred land. Nothing is truly sacred to them, afterall, besides money and power.

You can read a great and far more in depth article about the controversy surrounding the logging of the forest here. And below is a video of Jock explaining the issue occurring within the Grove:

Once I learned about Bohemian Grove many years ago I became fascinated with it.  I couldn’t believe that some of the world’s wealthiest men were all meeting in a California redwood forest to partake in some seriously disturbing rituals.  How can conspiracies not feel a little more real after seeing the photos and videos of what’s going on in there?

Although I never had any intention of attempting to sneak in, I did want to drive up to the entrance and feel the energy of the area in person.  As expected, it is lush and beautiful.  Once you make it to the main road where Bohemian Grove sits, the slew of No Trespassing signs start to sprout up.  I have literally never seen so many signs.  It is CLEAR outsiders are NOT welcome here.  So I took a few photos of the drive leading up to the road and of the entrance.  That is all!

For those interested in crazy conspiracies, secret societies and other witchy tales, you can read our articles on Satan’s Castle, Club 33 and Mozumdar Temple, all of which we made inside. 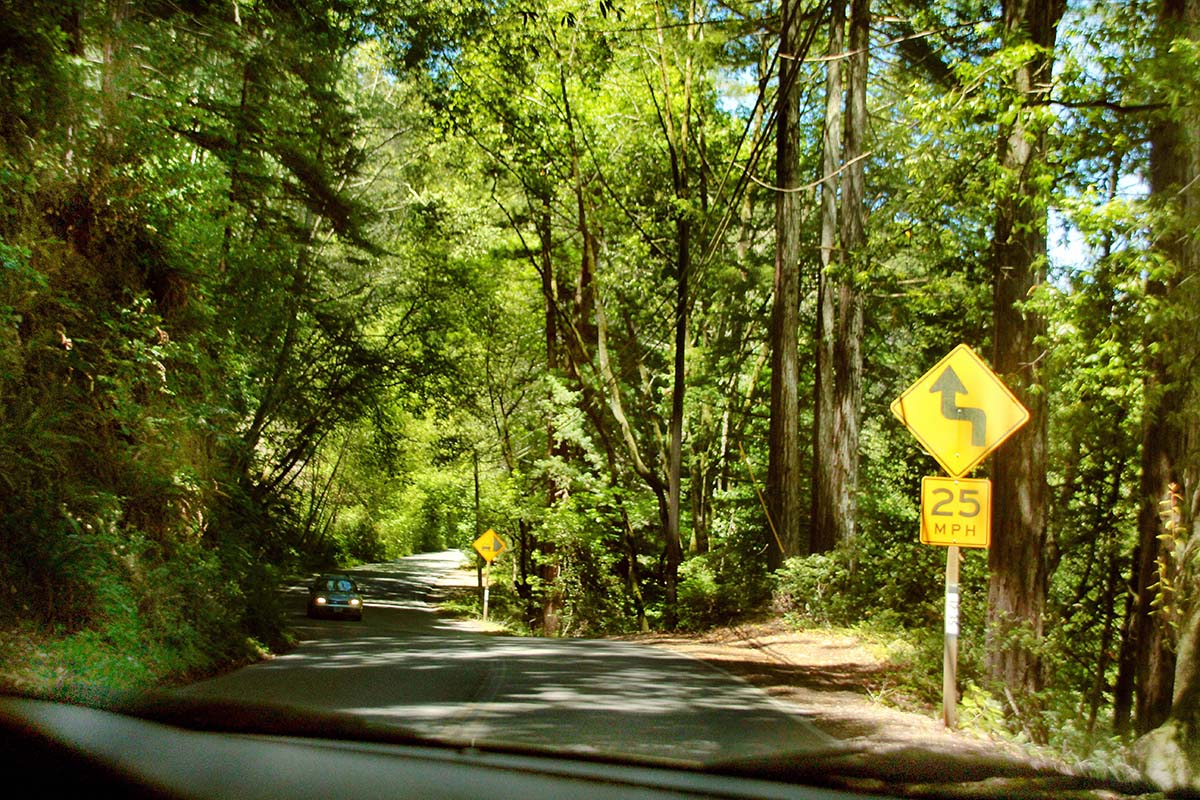 I mean really though, how many ‘No Parking’ signs do you really need in one small area? 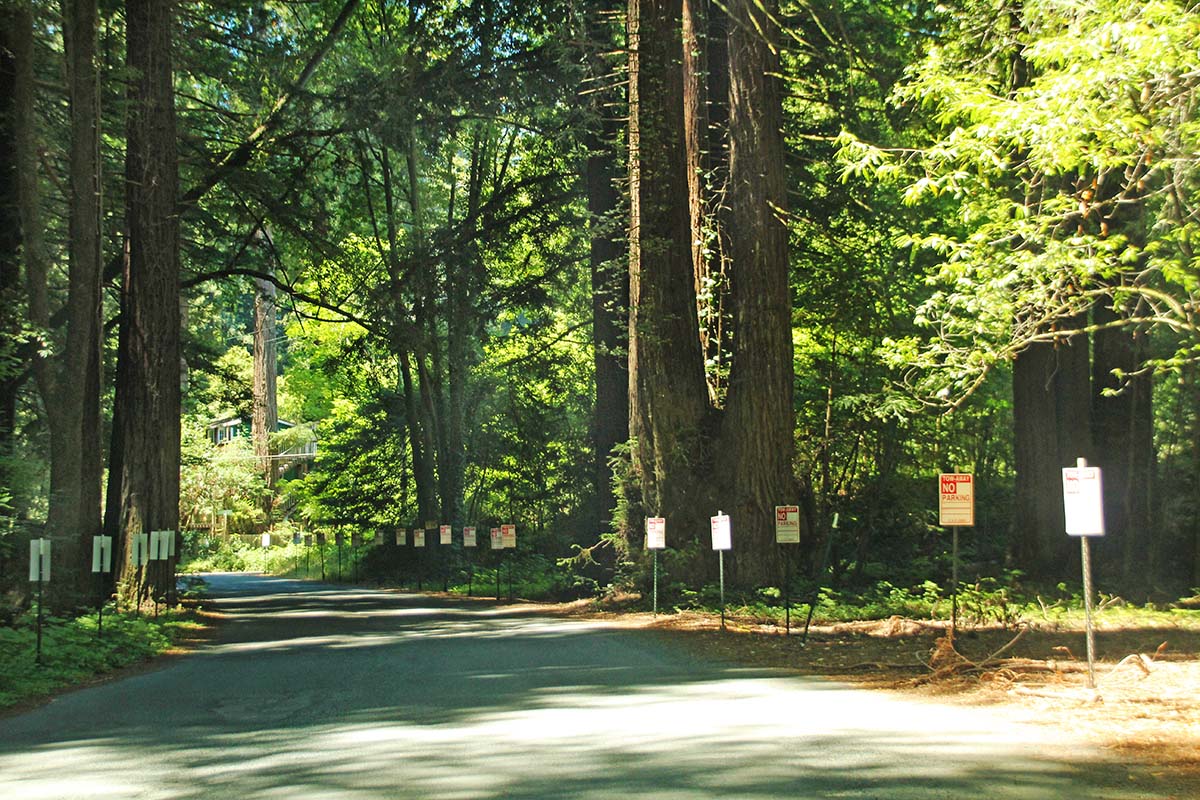 This is the final stretch before you are absolutely not allowed inside: 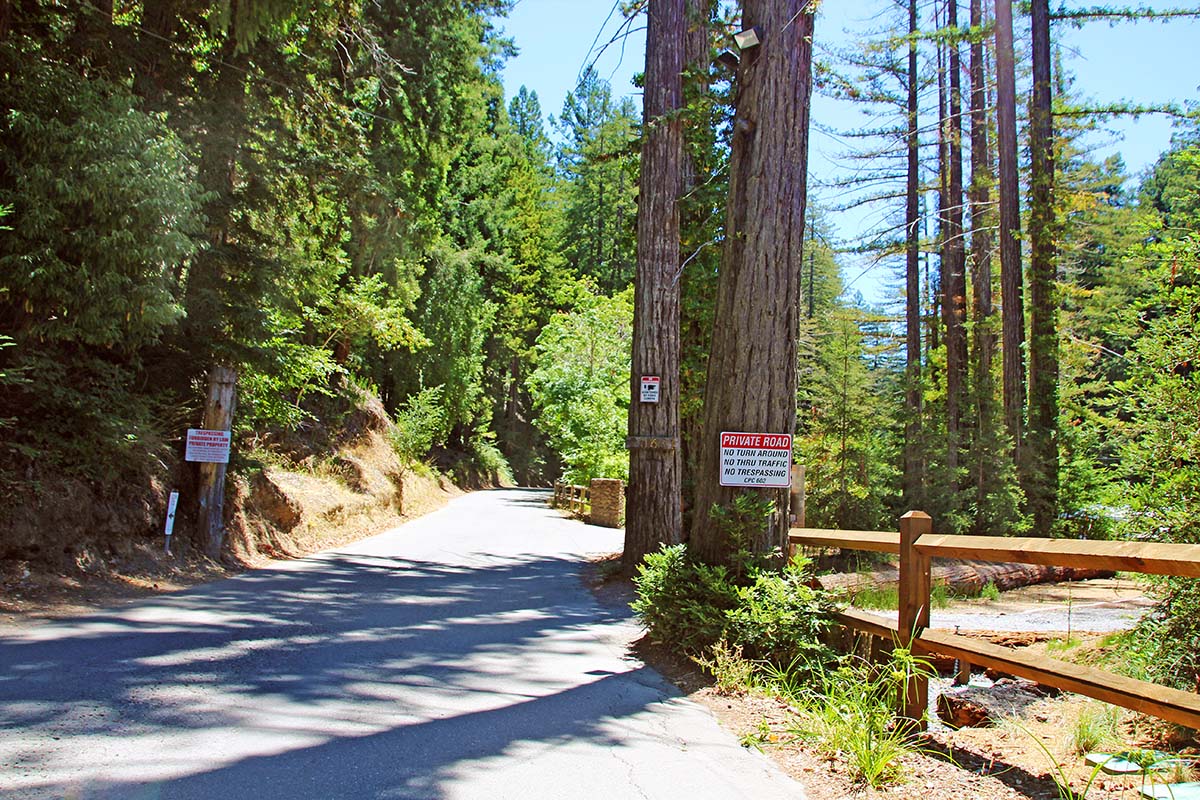 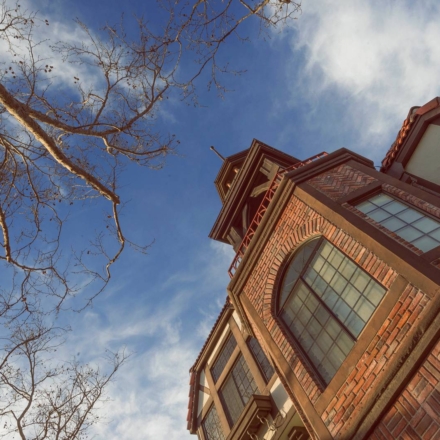